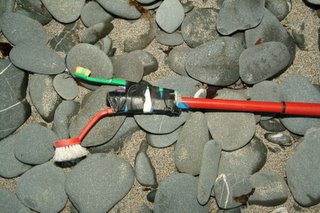 Just to mention that this guide/topo is selective and not comprehensive. John Hooper made a guide some years back, which covered more of the easier bouldering, combine the two and you do have a fairly comprehensive guide. Also worth noting that some of the names in PDF topo, may have been named previously. If anyone feels strongly about this let me know.

Hi back in 2004 I did a traverse in the main area at Godrevy on the left hand wall (looking out to sea) from the tiny arete before the zawn sit start on jugs move left onto a long barrel shaped bulge traverse this to the corner, get some undercuts and then little pinchy crimp things an rock up into the vague groove thing, a long reach for positive crimp and finish on jugs. Probably 15-20m of climbing. Grade about French 6c+ or V2/3 nothing hard but quite fun. Sam

Hi Sam, must be dense today but can't picture where you mean, which arete?

Found a photo - its close to the new V10 go to http://www.dbcs.org.uk/ go to the Godrevy 3 gallery, in the last photo of the V10, you can see the barrel traverse level with his left hand. If no one's done it/claimed it can I call it Monkey Barrel? Cheers, Sam

A problem by Barney ......If your interested the other night (18-07-06) I climbed the sloper/lip traverse in the cave that I’ve tried with you before. For those who don’t know it the problem is found on the Cave Area South Wall at the base of the decent/escape ramp towards the back of the cave. It starts about 10 metres left of the ‘Beeday’ wall (problem no. 3 see Andy’s Godrevy topo).

The full description is:-
Start from a sit-start matching a good hold on the right edge of the base of the descent/escape ramp. Traverse the lip rightwards using heel-hooks and increasingly sloping slopers to a tricky top-out at a square-cut groove. (Length about 4 metres-ish I think).

I feel safe to name it ‘The Sweep’ as I don’t think anyone has climbed it before. I reckon about V6 6b (maybe V5) for the grade as it felt OK when I did it but has seemed pretty hard trying it before. If any visiting Northerners ask best say it’s V3 though, hey?!