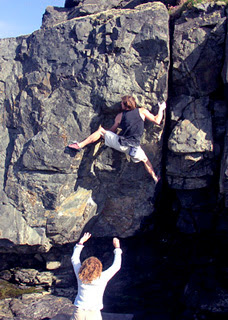 Andy - As you know I succeeded on my long-term project at Clodgy Point on Bank Holiday Monday (28th May). I’ve called the new highball problem ‘The Groove’ and think it’s V8 6c. When I did it I used two normal pads, one extra large one and one extra small one. I also used two normal sized spotters! The full description of the problem is as follows…

"** The Groove V8 6c X. One of Clodgy’s most serious and best highball problems takes the undercut overhanging groove in its entirety. A hard start leads to a technical and tenuous sequence of bridging moves up the groove, which is exited leftwards at its top. The arête on the right is used but not the chossy hanging blocks further right."

Also at Clodgy (on 24-07-07) I climbed a full anticlockwise traverse around the Australia Boulder which links ‘Northern Track’ into ‘Work in Progress’ and continues to reverse ‘Stainless Steel’ before finishing upwards at the starting point. I’ve named this link-up ‘Circumnavigation’ and think it justifies a grade of V9 6c as it takes in all of the hard climbing on ‘Work in Progress’(V8) in addition to lots of strenuous V5 climbing and is a demanding 20 metres long in total.

Oh! And I reckon that new traverse I climbed at Godrevy on 29-06-2007 should be called ‘The Poacher’ because I nicked it! It’s probably easy V7 6b but on the tiring side!

Well done Barney. So any takers for 'circumnavigation'? V9 eh I reckon it might be harder?

hi! I've got question maybe you know, how hard is second problem on this video? http://pl.youtube.com/watch?v=1GYBwolQBLQ

Hi, nice video,I'm not sure of the grade of that one. (Grades at Carn Brea, still have some mystique). I don't mind taking a stab at grading my own problems up there, but find it hard to grade some of the established ones. However I'd say somewhere between V2 and V5! Its also a good problem if you carry on traversing left, which is I'd say a bit harder, maybe hard V5.

What grade do you think it is?